HOW TO SURVIVE TO A NUCLEAR ATTACK

HOW TO SURVIVE TO AN ATTACK OR NUCLEAR DISASTER

The basic rules of survival in the event of a nuclear warfare or nuclear incident. 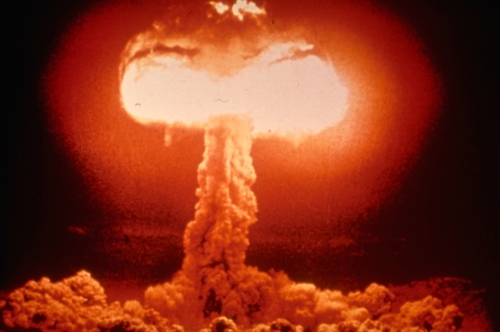 The following information are useful in the event of war or terrorist attack with use of nuclear weapons or in case of a nuclear power plant releases radioactivity into the air, due to a serious accident.

A nuclear explosion can release immense energy.
The energy released by a nuclear device is measured in Megatons and Kilotons, depending on the power. Recall that 1 kiloton is equal to the detonation of 1,000 tons of TNT and 1 Megaton to a million tons of TNT.

A secure fallout shelter is to be built under the ground and must have a reliable oxygenation system, which prevents contaminated air from entering the ventilation system. The walls must be very thick and in reinforced concrete and the interior covered with special insulating materials.

Lead and steel are widely used for the construction of bomb shelters, because they protect well from the radioactivity.

The entrance of the shelter/bunker is typically comprised of an armored door and a staircase that leads to the shelter. To enter the heart of the bunker you switch from the decontamination room and then from two thick doors, watertight and airtight. 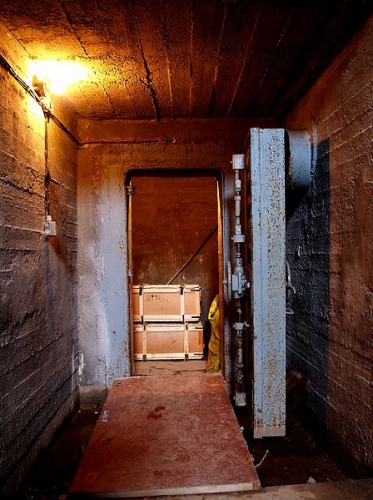 Inside the bunker there must be drinking water, food, electricity and toilets.

The great demand from the population has given rise to companies specializing in the construction of prefabricated bomb shelters.

Switzerland is very organized in this area because a law obligates every citizen to build a shelter under the house with 40-cm thick slab and 30-cm thick walls, with a food self-sufficiency, water and air for at least six months. For the apartment blocks exist condos bunker. 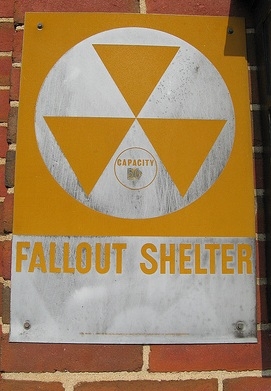 Improvised shelters may be the conducted of underground, road and railway tunnels of a certain length, caves, mines, sewers etc … 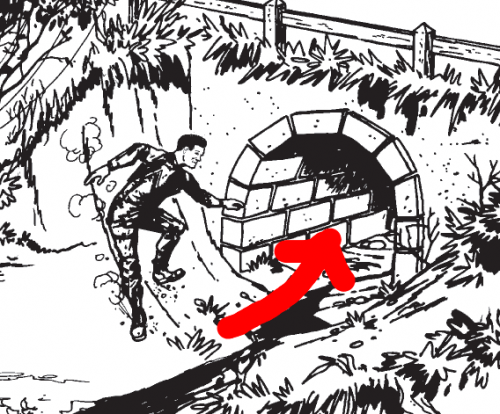 After the explosion of a nuclear bomb you must quickly reach a shelter before that starts the fallout, within half an hour by the lightning in the sky.

If you are unable to find an underground shelter, opt for any location below the meter and seventy from the surface level.

You can also take refuge in a ditch or you can dig a hole. When you’re inside the ditch or hole you must be lying face down and cover your mouth and nose with a cloth or t-shirt. In this way we avoid the heat wave, the shock wave and the direct radioactivity.
Before the fallout cover the hole or look for a new shelter. 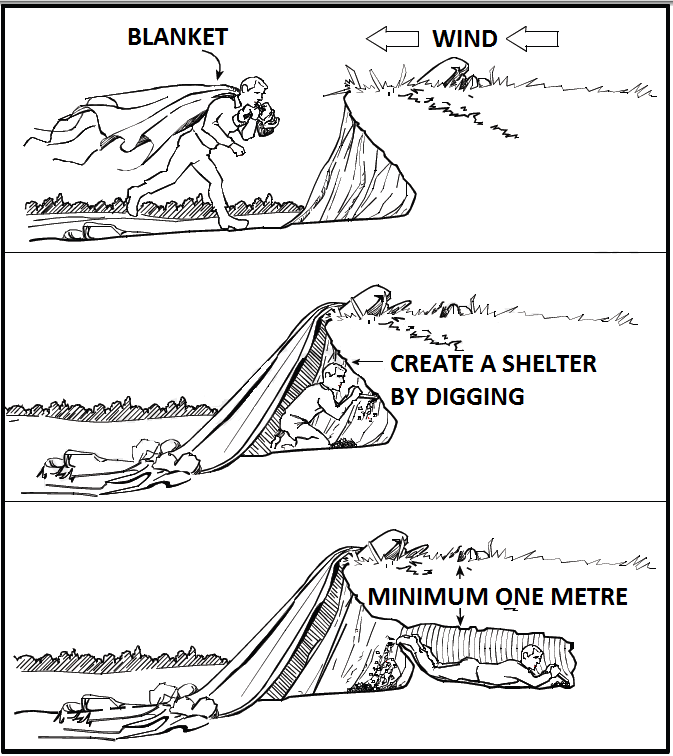 If it exists the probability that your city could be the victim of a nuclear attack, and you cannot abandon it, improvise a shelter in a basement or in any space below the ground level by reinforcing the walls with steel plates or sacks of earth, by sealing any openings with concrete.

The effects which causes a nuclear explosion: 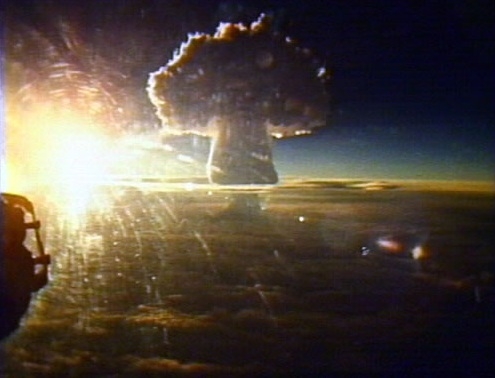 The explosion of a nuclear bomb causes a crater of considerable depth; debris fired in the air from the mushroom cloud will fall back into the affected area (primary fallout), while a part will be carried by the winds even at distances of kilometers (fallout secondary). The debris made radioactive by the nuclear reaction, will settle gradually on earth.

The primary fallout begins within a few minutes from the explosion by dropping in the detonation area the debris and the dusts more heavier and more radioactive.

The secondary fallout contains the lightest and finer material, which is transported by the wind and begins to decay after one or two hours from the explosion. The secondary fallout can lead the dusts to tens of kilometers away, depending on the power of the bomb. The radioactive material continues to fall for times ranging from 6 to 30 hours. After 48 hours in general the levels of radioactivity are radically lower.

Protect yourself from the nuclear fallout:

The fallout of the first 48 hours is the most dangerous, then it begins to decrease depending on the nuclear bomb power and on the distance from the hypocenter. It’s necessary to know the duration of the fallout so you know when to leave the shelter.

When the radioactivity reaches a level such that its absorption allows us to survive you can go outside.

RAD = Radiation Absorbed Dose. It’s the old unit of measurement of absorbed radiation dose (ie 0.01 joule of energy absorbed by a kilogram of tissue), but today has been replaced by the gray (1 GY  = 100 RAD).

REM = is the old unit that measures the radiation dose, today was replaced by the SIEVERT (1 SV = 100 REM). This unit measures the effects and the damage caused by the radiation on a human body. A chest X-ray leads to a 0.0001 SV absorption in a fraction of a second.  The Civil defense considers the 0.02 SV for year as the maximum quantity of radiation assimilable by the population.

If a person absorbs more than 5 Gray or Sievert (ie 500 RAD or REM) in 24-48 hours, dies. Survive is practically impossible with high doses of radiation. Doses between 2 and 4 Sievert does not ensure survival in 50% of individuals even with proper care and treatment. Doses of 1 Sievert could ensure the survival of most of the individuals, though with these values can happen fatal cases and illness.

The secondary effects of a nuclear explosion:

CONCEPTS OF SURVIVAL IN CASE OF NUCLEAR ATTACK: 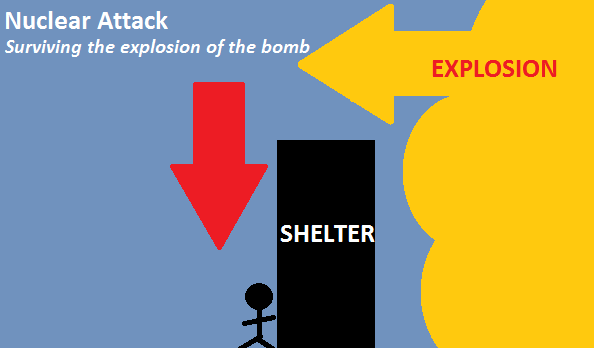 Concluding in case of nuclear attack don’t waste your time trying to get away as possible from the hypocenter, rather find a shelter to protect you from the fallout. Many are unaware of the secondary fallout, in a panic they run away, and then, die because of radioactivity. 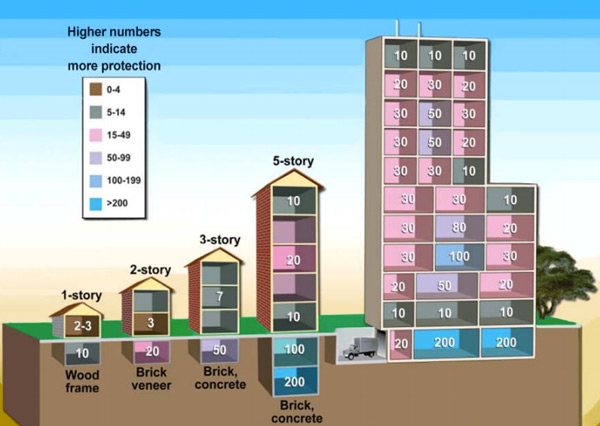 In this photo made by the U.S. Department of Homeland Security there is a graph of the safest places in the city to protect yourself from a nuclear attack. How did you notice the higher floors are less secure than those in the subsoil, the latter are the ideal shelters.

Americans researchers have recently said: “Shelter on site. This is the only great message, and the best way to save lives and prevent diseases related to radiation. It goes against our instincts to give up running away from danger to reunite our family. But if the kids are at school or kindergarten, that’s where they should stay. The disastrous effects arising from the fallout can be avoided 100%. Is estimated that 285,000 people, without protection within a mile from the detonation in Los Angeles, would face illness or death caused by exposure to radiation. Just a rudimentary shelter, such as a wooden construction, and we would save 160,000 lives. If people could be able to find refuge in basements or multi-storey buildings or shopping centers, 240,000 of these 285,000 could be saved. If it were possible to reach an underground car park or the center of a high-rise offices, no mortal expositions would be given.

In case of a nuclear power plant disaster, the government should provide tablets of potassium iodide to provide protection to the thyroid.

This gland tends to fix the radioactive Iodine-131.

One tablet acts for 24 hours and appears to be effective if those who assumes was exposed only for a short time. It’s effective when taken up to 3 or 4 hours from the exposure to the radiations.

NUCLEAR POWER PLANTS IN THE WORLD:

To date, the active reactors in the world are 435 and generate an output of about 369 GW. 63 reactors are under construction and 160 are in planning. 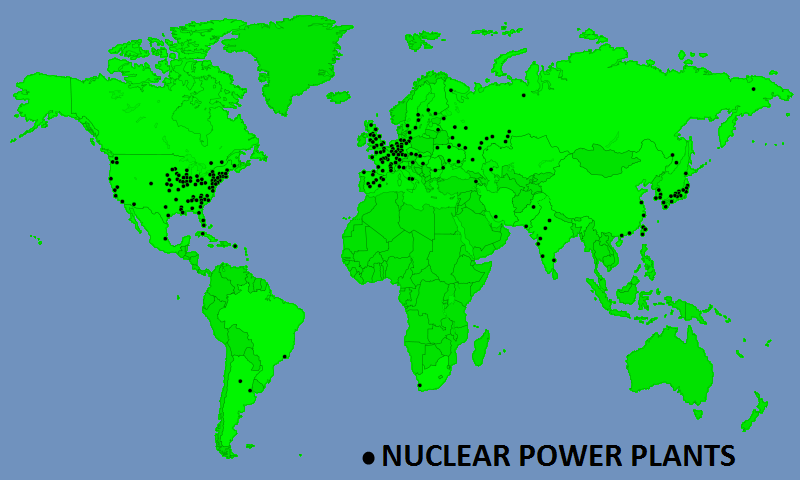 NUCLEAR WEAPONS IN THE WORLD:

The most powerful nuclear bomb ever detonated on the planet was the Tsar Bomba created by the USSR. It was exploded in 1961 on an island north of the Arctic Circle, it released as many as 57 megatons of energy. Recall that the bombs, exploded by the Americans, on the Japanese towns of Hiroshima and Nagasaki, respectively, had a power of 16 kilotons (Little Boy – Explosive used: uranium) and 25Kt (Fat Man – Explosive used: plutonium). 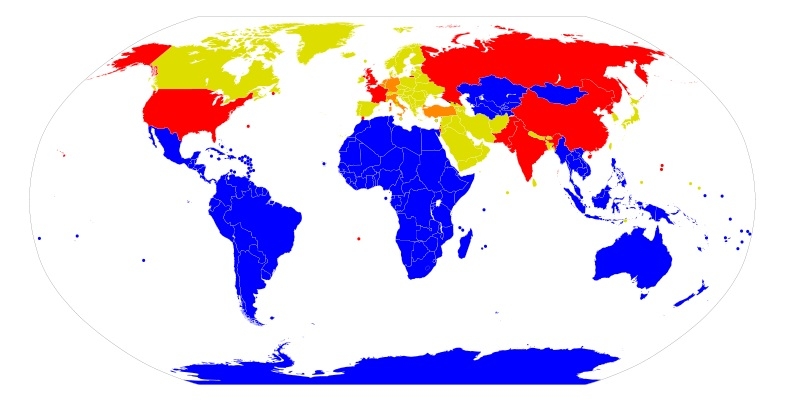 Data updated to 2014 show the number of nuclear weapons held by the states members of the nuclear club:

The following information is only an estimate of the NRDC (Natural Resources Defense Council) and therefore doesn’t ensure the complete accuracy of the information.

To measure the severity of nuclear and radiological accidents, in 1989 was born the INES scale, based on 7 criticality levels to make perceptible properly to the population, the current level of seriousness of the incident nuclear. 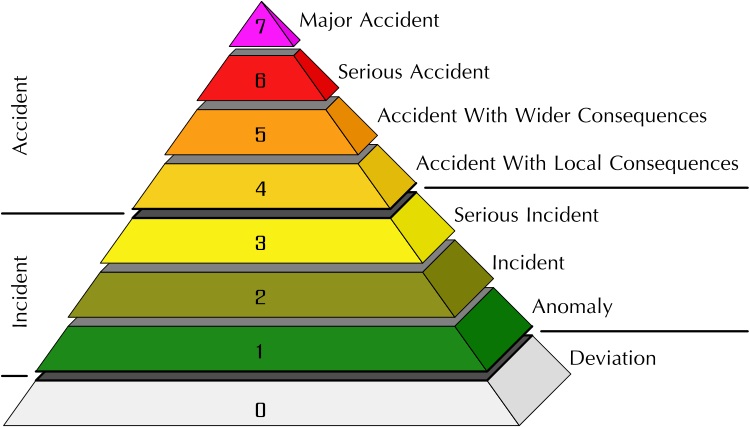 In total the small and big nuclear power plant accidents occurred are over a hundred.